A Stroll Through Liberty Square with Jason Sheridan - Show Notes!

by Meagan Meli May 26, 2020
This week's episode we are joined by Jason Sheridan of Podcast: the Ride!
We chat about Liberty Square in the Magic Kingdom, to aid with the visuals, these show notes will help immensely.

We start off by chatting about the American Bicentennial - for those who don't know EXACTLY what America was jacked up on it was a central event in the memory of the American Revolution. The Bicentennial culminated on Sunday, July 4, 1976, with the 200th anniversary of the adoption of the Declaration of Independence.

This brings us to talking about Liberty Street that was being developed for Disneyland. Thanks to the Disney Parks Blog, we have a brief synopsis of what it would have been.

A Look Back: Liberty Street at Disneyland 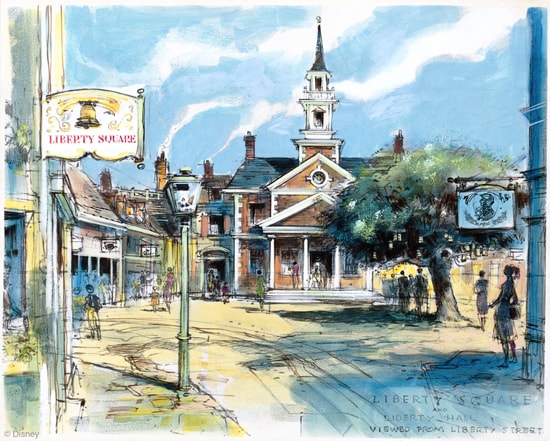 A new theater was announced by Disney Parks Blog, to be built in a new alleyway along Main Street USA back in April 2018. Since the announcement, the posts have been deleted officially by Disney, but here is some proof of the announcement: A Disney blog known as Ziggy Knows Disney does a round up on the announcement, the disappearance and why. Check it out here.

As for the "brown streak" through Liberty Square, here is a visual of the path! (source: Reddit)
It's gross, it's cool, it's Disney magic!

TouringPlans.com has some gorgeous photos available on their website of  Liberty Square that you can check out here, but these are a few lovely ones. Please visit the website I linked above to see more of the land if you've never been! You can absolutely see the resemblance! The attention to detail is really something in this area of the park.

If you'd like more information on the Disney Hole, you can learn about it in this article here.

It is now a parking lot: But it was meant to be Disney Quest, that resided in Downtown Disney up until a few years ago when it closed in 2017.

Tour the location in this video!

We also mourn the loss of the fantastic show that took place in Liberty Square, Great Moments in History with The Muppets. Now it's "seasonal" after Disney had announced it's end date in 2019. If you'd like to see the show, you can see it here!

In addition to that lovely show, Jason asked about the Rainy Day Cavalcade, which is the cutest thing ever. Check it out in this video:

We love that this exists! With the unpredictable weather in Florida, it's a great solution. Meg speaks about the one that exists in Tokyo to replace the Electrical Parade, you can check out Nightfall Glow here:

Just so you know, I cried within 3 seconds of hearing the music. It's so good.

We start freaking out about the location of the Diamond Horseshoe's location in the Magic Kingdom. Here is some reference:

The Diamond Horseshoe is considered to be located in Liberty Square according to many resources.

It says on the top right Liberty Square. WHAT? The blue peg is the location between the FRONTIER TRADING POST and LIBERTY TREE TAVERN. My goodness. Now that we have made it through that, please view the magic of the Harry Packer Mansion in Jim Thorpe, PA. Also known as the "Murder Mansion"

If you visit the website their gallery shows how absolutely stunning this mansion is. Here are a few pictures: WE WANT TO LIVE HERE

Also, we must share the Nelly video we spoke about:

Truly a product of it's time.

In June of 2014 Disney announced they would be changing their Yankee Trader Shop into what is now known as Memento Mori, a shop for the Haunted Mansion attraction.

Basically, Disney just gave it a refreshed paint job and a gorgeous new sign and thus Memento Mori was born. For a few years outside the Haunted Mansion was this gorgeous cart inspired by a piece of art Rolly Crump did: There aren't many photos of it, but this is it! Apparently, one resides in New Orleans Square as well. We'd love to confirm that when the parks open again!

This is the coffin bag: